I’ve always loved animation. Be it Bagpuss, Svankmeyer’s grotesques or Harryhausen’s skeleton hordes, animation has always felt like magic to me. I love making animation and I love talking about – and sharing – what I love.

Although born in Scotland I was raised in Devon and quickly fell in love with both its landscape and its rich folklore, a fascination that inspires my work to this day. A lifelong enchantment with film led to the study of Fine art / Film at Canterbury University and subsequently a career path in the creative industries. Landing a job at BBC Manchester, working initially in tape despatch, I was asked by Producer Gerard Barry to create ‘stingers’ for a ‘Fortean Times’ style paranormal show ‘Weird Almanac’.

During this time I also started developing a freelance career in illustration, producing art for Headpress magazine, Critical Vision publications and subsequently Oxi magazine in Athens Greece. I was also asked by producer Debbie Young to create graphics for the now infamous zombie episode of Derren Brown’s ‘Trick of the Mind’.

After living and working in Manchester, London and Athens juggling film and illustration I returned to my Devon roots in 2005 and picked up the baton I’d last carried back at University: Animation. Now almost exclusively freelance I focused my energies on creating a series of short films celebrating neglected British legends with funding sourced from local arts grants. The resulting animations, ‘Scayrecrow’, ‘The Screaming Skull’ and ‘The Hairy Hands’ won a plethora of awards nationally and internationally (including a ‘Media Innovation Award’, ‘Visionary Award‘ at Buried Alive Film Festival Atlanta and a ‘Best British Short Film’ nomination at Raindance) and firmly established both Carrion Films and myself in the fields of animation and the ‘fantastique’. 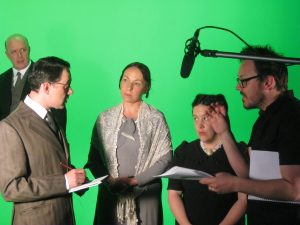 The popularity of the animations went on to open numerous doors for me in various fields: Radio scripts (‘The Demon Huntsman’ & ‘Dead Man’s Shoes’ for Glass Eye Pix ‘Tales from Beyond the Pale’ series), author (most recently a chapter on German Expressionist horror ‘Hands of Orlac’ for the ‘Hidden Horror’ book) and genre journalist (a UK correspondent for Fangoria and Rue Morgue horror magazines).

This period also established a now long standing relationship with the Exeter Phoenix, the Animated Exeter festival and its youth based learning workshops and activities. In 2010 I was awarded ‘Investors in Work Related and Enterprise Learning’ by the Education Business Partnership for my classes with Exwick Heights Primary School. I’ve since gone on to work with ‘Cinemagic‘ Belfast,  the ‘Into Film’ / BFI film educational strategy and – as of October 2020 –  a BFI Academy tutor.

In between the workshops, the lecturing, being a Dad and the commercial animation – incredibly – I still animate for fun! In 2017 I completed my most ambitious personal project yet, an animated feature length animated study of the most haunted house in England – ‘Borley Rectory’ – with Reece Shearsmith and Julian Sands. The film was released on Blu Ray in 2019 to critical acclaim and is now streaming on Amazon Prime and Netflix as of October 2021.